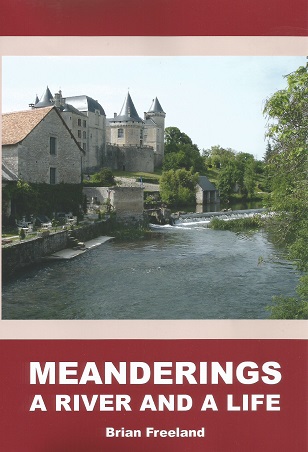 There are about 15 copies of MEANDERINGS still available
at the end of Talks; from ATWP on Amazon,
or by post from
Brian Freeland,
12 Lewis Lane, Ford, Arundel, West Sussex BN18 0TY

SEARCHING FOR
MY TAMBOURINE
.

In the summer of 1966, shortly after England’s football team had won the World Cup, I teamed up with theatre colleague David Sculpher to convert an old BBC Radio vehicle into a comfortable ‘camper-van’. Together with a couple of young ladies we set out to drive across Europe: no particular route planned; no timetable. Florence and Venice, of course, and an unforgettable night at the Opera in the Amphitheatre at Verona. Then down the full length of what was then Yugoslavia, heading for Greece. Visas required at the border, but few problems after that. Whenever we produced our football at the various Yugoslav camp sites we were quickly surrounded by youngsters eager to practice their fluent English; “Bobbee Charlton; Bobbee Moore: Nobbee Stiles”.

Passing through the southern border controls into Greece we immediately discovered what we really should have known, that the Yugoslav dinar had no value outside of that country. We simply turned around, drove back through the border control to the nearest camp site, and blew the lot on an excellent meal and a few drinks. We also acquired a cat, but maybe more about that later.

Into Greece, and heading towards Athens, we stopped off at a little village fete. Nothing special: like village fetes anywhere in the world there were a few small fairground rides; an arena, and various stalls and sideshows. Except that, just near the entrance, this village fete had a man playing a tambourine. The man was not very tall; certainly not young, casually dressed, thinning hair - uncovered because his cap was on the ground in front of him. A cap filling with coins from an audience enjoying the performance of a man who sang a little, and danced a little, and smiled a lot, and played his tambourine as though he was entertaining the gods on Olympus. A man clearly at peace with the world.

David and I had each recently finished contracts with opera companies: David at Sadlers Wells; me with Scottish Opera. Our performances involved several pantechnicons crammed with scenery and costumes and lighting and musical instruments: a huge payroll of singers, musicians, administrators, wardrobe staff and technicians; overnight journeys from one city to another to large venues with up-to-date technical equipment, dressing rooms, staff, publicity and box office. All this merely to stage a musical entertainment. And yet here was an elderly man entertaining people, making a living, with just a tambourine and a cloth cap. I asked myself what I could do to that degree of self-contained  professionalism? Was there no one ability in which I could challenge all competition; could touch an individual level of seeming perfection? Apparently nothing, although, understanding life backwards, I can point to that village fete experience as the start of a career spent subconsciously ‘searching for my own tambourine’.

According to William Hazlett (1778-1830) in his essay On the Knowledge of Character there is nothing that helps a man in his conduct through life more than a knowledge of his own characteristic weaknesses; and nothing tends to the success of man’s talents than knowing the limits of his faculties, which he then concentrates on some practical object. “One man can do but one thing: universal pretensions end in nothing” he wrote. Hazlitt considered there were those who have, for want of this self-knowledge, gone strangely out of their way in their search for this ‘practical object’, and others who had never found it at all despite a lifetime of searching.

Hazlitt also observed that authors in general over-rate the extent and value of posthumous fame: a depressing thought for an author commencing a new book in his eighty-first year. Fortunately the book will have a happy ending: I did find my ‘practical object’; my ‘tambourine’, admittedly rather late in life, and only after having gone strangely out of my way in far too many different directions and, indeed, in many different countries. That search is the ‘clothes-line’ on which I shall peg some memories (not all of them mine) together with personal experiences from the past eighty years. My apologies if you have come across some of these anecdotes in previous publications, but their relevance to the theme of this, my final book, encouraged one last airing.

I have read your “Meanderings” with a good deal of pleasure.  You have certainly led an interesting life and how you spliced this with a delightful drift down the Charente is nothing short of masterful.
I suppose that, with your background, splicing links between people, places and chronology might have been a given.  However, I particularly enjoyed your skill in weaving disparate subjects together with the unruffled ease of a gently flowing river: brilliant!
Chris Davies: New Milton Probus

As with MEANDERINGS, the new book is available direct from ATWP; online via Amazon, and also on sale at the end of Talks and Presentations.
SEARCHING FOR MY TAMBOURINE, however, also has specific interest for  those working in the theatre, or training for a theatre career,
and is available through selected and arts-specific Bookshops.

Please contact us for details of your nearest supplier.

Thank you so much for sending the Society for Theatre Research a copy of Searching for My Tambourine.
It was a very kind thought but we no longer have a library. This has made me the lucky recipient and I couldn't resist diving into it straight away and found myself reading away when I should have been getting on with other urgent business!  I've enjoyed it greatly.
If you don't already know of the STR Theatre Book Prize do take a look at the information about it on the Society's website -
you might want your publishers to enter it, although I am a little concerned about the high proportion of possibly previously published quotation.
Howard Loxton.

I want to say how much I liked your book: not only interesting, but full of both food for thought and glimpses of a fascinating career.
Gerard Hocmard: France Grande Bretagne Association.